Rivers are one of the best natural gifts in the world, which are not only associated with the religious beliefs of Indians but also play an important role in the development of our country's economy. 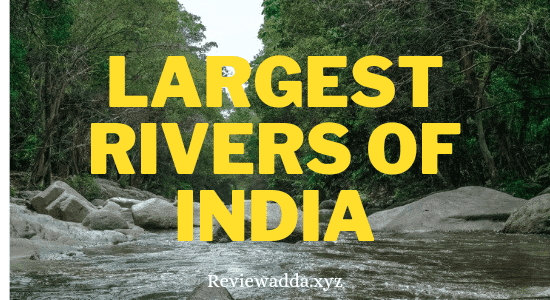 The main sources of these rivers are lake, waterfall, glacier or rainwater. Often in many competitive examinations like CDS, UPSC, Railways, SSC, NDA, State Services, questions are asked about India's largest and longest rivers, so today we will give you Largest Rivers of India. Telling about-

This river is the largest and ancient river not only in India but also in Asia. According to historians, the emergence of human civilization took place on the banks of this river, which includes the city civilization, the Indus Valley civilization, etc.The river flows from the Tibetan plateaus to the famous religious site Kailash Man Sarovar and passes through India to many other neighboring countries. This river joins the Arabian Sea through Pakistan and Gujarat.

• Place of origin - The point of origin of the Indus river is considered to be a stream called Sin Ka Bab near Mansarovar in Tibet.

The Brahaputra River originates from the Tibetan plateaus. This river is also called Devang and Lohit River. The river passes through the Sakri valleys of Assam to Bangladesh. The Brahmaputra is no less comparable to other rivers in India, as the only means of play and for fisheries.

• Place of origin - It originates from the Himavah called Chemayung Dung near Mansarovar in the south of Tibet.

Ganga River The river Ganges is the most sacred and religious river of India, many people have religious beliefs attached to this river. This river is also considered a symbol of Indian cultural unity. The river passes through several provinces of Uttar Pradesh and flows through Bihar into the Bay of Bengal.

Godavari is also one of the sacred rivers of India, it flows from the Western Ghats to the Eastern Ghats of India, it is the second largest river in India. At the same time, it handles the agricultural system of Godavari Western Plateau.

• Place of origin - originated from Trimbak hill in Western Ghats

This river is also one of the major rivers flowing in India, the river flows through Telangana, Maharashtra and Andhra Pradesh into the Bay of Bengal. A large delta exists on the banks of this river, which is one of the fertile regions of India.

• Place of origin - The mountain of Western Ghats originates from Mahabaleshwar.

What is freelancing and how to do it?

What is freelancing and how to do it